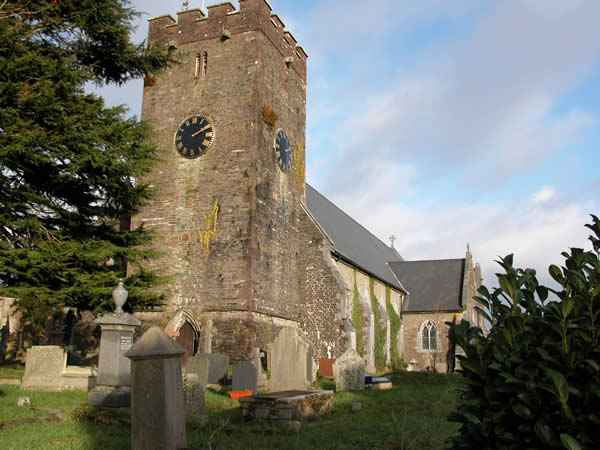 There can be fewer towns in Wales more attractive than Llandeilo in Carmarthenshire, sitting proudly on a hill above the river Tywi. And there are fewer valleys lovelier than the Tywi, the longest river which flows entirely through Wales. The Afon Tywi (Welsh) or River Towy (English) rises on the lower slopes of Crug Gynan in the Cambrian Mountains (Grid Reference SN802631) at an elevation of 1,601 feet and, as it flows through the Tywi Forest, forms the border for several miles between Ceredigion (formerly Cardiganshire) and Powys.

From this source on the wild and romantic Cambrian Mountains in mid-Wales, not far from the sources of the Severn and Wye rivers, the Tywi flows south for 68 miles to reach the sea in Carmarthen Bay. But unlike its longer neighbours, the Severn and Wye, who are soon seduced by the siren song of neighbouring England to the east, the Tywi remains loyal to the country of its birth for the whole length of its southwards journey to the sea.

Almost every conceivable British landscape can be found along the Tywi's length. The lonely moorland vistas of its birth soon give way to the softer wooded terrain of its upper reaches, until the river, along with several of its tributaries, calmly disappears for a while into the unruffled waters of Llyn Brianne reservoir, one of the largest man-made lakes in Wales. In its more leisurely middle course the meandering Tywi creates some of the most fertile farming land in Wales, passing through such ancient market towns as Llandovery and Llandeilo. Then finally, in its tidal reaches past Carmarthen Town, home to the occasional coracle fishermen, the Tywi meets and disappears into the salt waters of Carmarthen Bay.

It's no wonder that the Romans made a bee-line for the Tywi Valley after they invaded Britain in 43 AD, for here was not just rich agricultural land and an abundance of game and fishing, but also gold in them thar hills at Dolaucothi, which the Romans turned into one of the largest gold mines of their vast empire. Llandeilo, too, was a target for the Romans who built a fort here, finally uncovered in an excavation by the local archaeology trust in 2005. Traces of two Roman forts have been found under a field in Dinefwr Park. This exciting discovery indicates that the Romans were here in strength, both in the invasion phase and in the more settled times that followed.

The Roman legions may have left Britain for good in 410 AD, and had abandoned Wales even earlier, but history didn't stop with the end of Roman rule. Wales and Llandeilo have a rich mediaeval history to surpass that of the Roman occupation, for more written records have survived from the Middle Ages to tell the story in great detail.

Llandeilo has been a holy place for as long as Christianity has been in Wales and was one of the main centres from which this once-obscure middle-eastern cult spread far and wide throughout Wales. St Teilo, from whom the town's name derives , flourished about 550 AD and was a cousin and contemporary of our patron saint, St David. He must have been one of the most prolific of holy men, for at least 45 places of worship are dedicated to him throughout the Celtic world, including churches in Brittany and Cornwall.

For a while the town was a Royal capital, its castle at Dinefwr being the administrative and military centre of the once powerful Kingdom of Deheubarth in south west Wales. The agricultural wealth of the Tywi Valley made its later landowners powerful and influential in their own right, and a 15 th century Llandeilo magnate, Sir Rhys ap Thomas, is even credited with killing Richard III at the Battle of Bosworth in 1485 to help his kinsman, Henry Tudor, become Henry the Seventh of England, a country Henry had never set foot in until that fateful day. The wealth of Llandeilo, too, attracted the ever-greedy attentions of Henry the Eighth, who beheaded the local landowner to get at his lands in 1531, something Mediaeval Kings had a habit of doing with annoying frequency.

Llandeilo is surely the jewel in the Tywi's crown, and there is more than just a long pageant of rich history to this picturesque market town. We hope this website will reveal that modern-day Llandeilo, too, has its attractions. Llandeilo today is still an essentially rural town, surrounded by farm and woodland, hill and dale, where the Welsh language is still in common use, but its geographic location at the cross road of the main north-south A483 and the east-west A40 trunk routes place it strategically close to the much larger west Wales conurbations of Swansea, Neath, Llanelli and Carmarthen. And its proximity to the M4 motorway places it within easy reach of Cardiff, Bristol and all places beyond.

The wealth of historic monuments like mediaeval Dinefwr and Carreg Cennen castles make Llandeilo a tourist centre from which to explore the riches of west Wales. From here the Brecon Beacons National Park is but a short drive, as are the equally lovely upland landscapes of the Carmarthenshire Fans and Black Mountain. Drive just a little further and you'll soon have the sandy beaches and cliff walks of the beautiful Gower Peninsular at your disposal. And only an hour's drive away are the equally delightful seaside resorts and bays of Pembrokeshire and Cardiganshire. Croeso a mwynhewch - Welcome and enjoy.

This site was developed for visitors and locals to learn about Llandeilo and it's rich history and to gather together a diverse range of local information in one place.

It is our intention to reproduce useful publications and images on Llandeilo history which are no longer in print.